6 Books to Help You Grow During the COVID-19 Pandemic

The right book doesn’t just entertain you — it can help you grow as well. The COVID-19 pandemic may be wreaking havoc across the world, but that doesn’t mean you can’t take some control over your life in the meantime. By reading books like the ones we’ve compiled for you below in our list of summer 2020 must reads, you can continue to grow into the best possible version of yourself.

1. No One’s Listening and It’s Your Fault: Get Your Message Heard During Organizational Transformations, by Pam Marmon 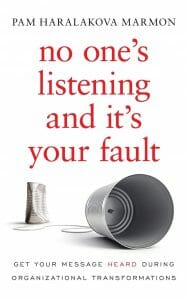 Amazon Synopsis: Leading change at your organization can be a daunting proposition while you face mounting pressure for growth. As a senior leader, what should be an exciting time for your organization becomes a challenge, leading to a fear of change and the belief that change is hard.

Pam Marmon shares a refreshing and radical truth: With the proper process, change is not hard. Marmon helps to unpacs the practical framework of implementing change to help you get your message heard during organizational transformations. As the change catalyst, you’ll learn how to tap into the essence of your organization’s culture to determine what will resonate with your team in a language they understand. Inspire others to take action by creating alignment at every level and empower influencers to carry your message. You can confidently build change agility with long-lasting impact to advance innovation, implement digital transformation, and achieve exponential growth.

2. Give & Get Employer Branding: Repel the Many and Compel the Few with Impact, Purpose and Belonging, by Bryan Adams and Charlotte Marshall 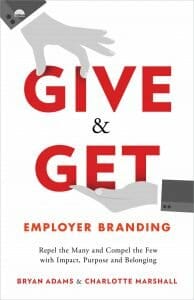 Amazon Synopsis: In today’s fiercely competitive job market, with the balance of power squarely in job-seekers’ hands, how can organizations attract and retain the most talented candidates—and the best additions to their culture? The answer may surprise you. The most effective employer brands don’t attract candidates; they repel them.

Combining the expertise of employer brand industry leaders Charlotte Marshall and Bryan Adams, Give & Get Employer Branding redefines the concept of an employee value proposition entirely. Instead of a sales pitch aimed at seducing candidates with sizzle, this refreshing new approach harnesses the value to be found within the cultural realities and expectations of the company. You’ll learn how to create a “smart filter,” elevate your organization’s strengths by pairing them with what it truly takes to thrive, and answer the burning questions on candidates’ minds like never before.

3. The Choice: Embrace the Possible, by Dr. Edith Eva Edgar 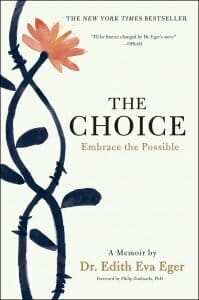 Amazon Synopsis: At the age of sixteen, Edith Eger was sent to Auschwitz. Hours after her parents were killed, Nazi officer Dr. Josef Mengele, forced Edie to dance for his amusement and her survival. Edie was pulled from a pile of corpses when the American troops liberated the camps in 1945.

Edie spent decades struggling with flashbacks and survivor’s guilt, determined to stay silent and hide from the past. Thirty-five years after the war ended, she returned to Auschwitz and was finally able to fully heal and forgive the one person she’d been unable to forgive—herself.

Edie weaves her remarkable personal journey with the moving stories of those she has helped heal. She explores how we can be imprisoned in our own minds and shows us how to find the key to freedom. The Choice is a life-changing book that will provide hope and comfort to generations of readers.

4. The Ride of a Lifetime: Lessons Learned from 15 Years as CEO of the Walt Disney Company, by Robert Iger 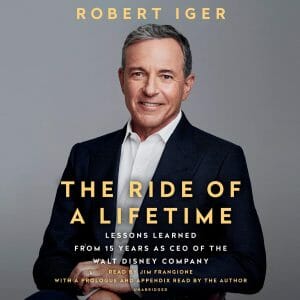 Amazon Synopsis: Robert Iger became CEO of The Walt Disney Company in 2005, during a difficult time. Competition was more intense than ever, and technology was changing faster than at any time in the company’s history. His vision came down to three clear ideas: Recommit to the concept that quality matters, embrace technology instead of fighting it, and think bigger – think global – and turn Disney into a stronger brand in international markets.

Fourteen years later, Disney is the largest, most admired media company in the world, counting Pixar, Marvel, Lucasfilm, and 21st Century Fox among its properties. Its value is nearly five times what it was when Iger took over, and he is recognized as one of the most innovative and successful CEOs of our era. In The Ride of a Lifetime, Robert Iger shares the lessons he learned while running Disney and leading its 220,000-plus employees, and he explores the principles that are necessary for true leadership. 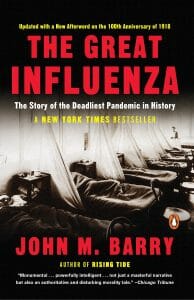 Amazon Synopsis: Magisterial in its breadth of perspective and depth of research, The Great Influenza provides us with a precise and sobering model as we confront the epidemics looming on our own horizon. As Barry concludes, “The final lesson of 1918, a simple one yet one most difficult to execute, is that…those in authority must retain the public’s trust. The way to do that is to distort nothing, to put the best face on nothing, to try to manipulate no one. Lincoln said that first, and best. A leader must make whatever horror exists concrete. Only then will people be able to break it apart.”

At the height of World War I, history’s most lethal influenza virus erupted in an army camp in Kansas, moved east with American troops, then exploded, killing as many as 100 million people worldwide. It killed more people in twenty-four months than AIDS killed in twenty-four years, more in a year than the Black Death killed in a century. But this was not the Middle Ages, and 1918 marked the first collision of science and epidemic disease.

6. The Book of Joy: Lasting Happiness in a Changing World 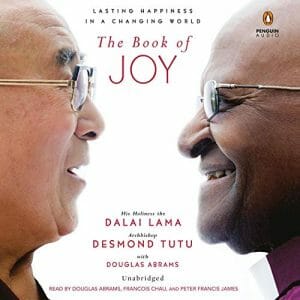 Amazon Synopsis: Two great spiritual masters share their own hard-won wisdom about living with joy even in the face of adversity.

The occasion was a big birthday. And it inspired two close friends to get together in Dharamsala for a talk about something very important to them. The friends were His Holiness the Dalai Lama and Archbishop Desmond Tutu. The subject was joy. Both winners of the Nobel Prize, both great spiritual masters and moral leaders of our time, they are also known for being among the most infectiously happy people on the planet.

10 Books to Read at Every Stage of Your Career